For more about botany in the Buckeye State, visit  ohioplants.org, the companion to Ohio Plants, EEOB 2210. 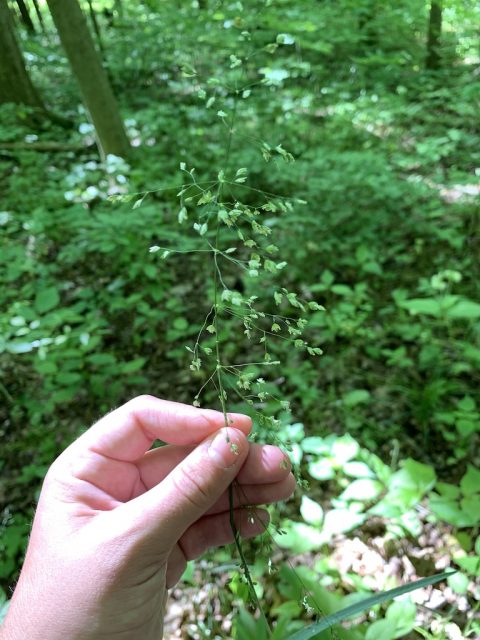 This grass was making its way to the top of field vegetation. It has large leaves towards the soil but small branches at the top with little spikelets on it that make it easier to distinguish. It can grow to be almost 4′ tall! (https://www.illinoiswildflowers.info/grasses/plants/millet_grass.html) 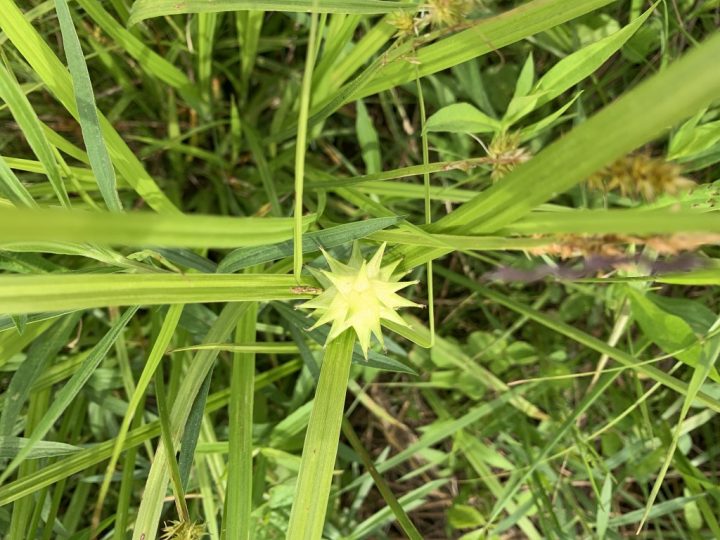 Researching this plant was fun because the website I found said that the spikelet resembled a “medieval mace” so it can be easily identified. It made me chuckle because it is pretty accurate. The leaf blades are long and also spikey but tend to curve under instead of growing straight up. 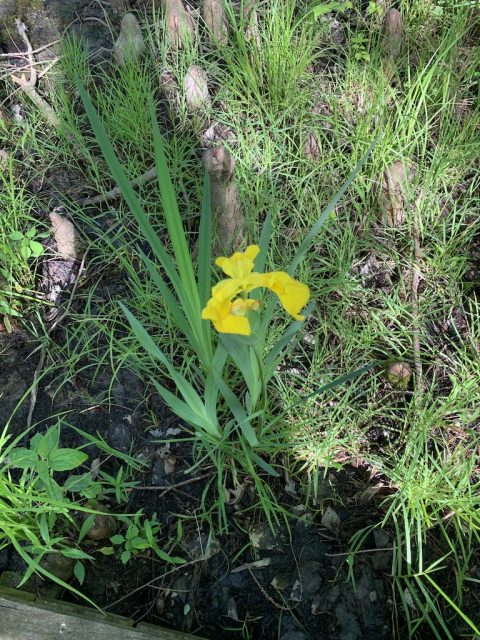 Yellow flag? HOW DARE YOU

This stinker is native to Europe, Asia, and North Africa and prefers wetlands with moist soil. I was curious when I saw this plant because it was near a swamp and I thought it was a peculiar flower to be randomly sprouting. I emailed the arboretum where I was looking and they said it made its way there all on its own and has been invading their swamp for years! It escaped cultivation in the 1700s and is now present in 46 states. They spread quickly via rhizomes and can take over wetlands by clogging the soils and streams. (http://nyis.info/invasive_species/yellow-flag-iris/) 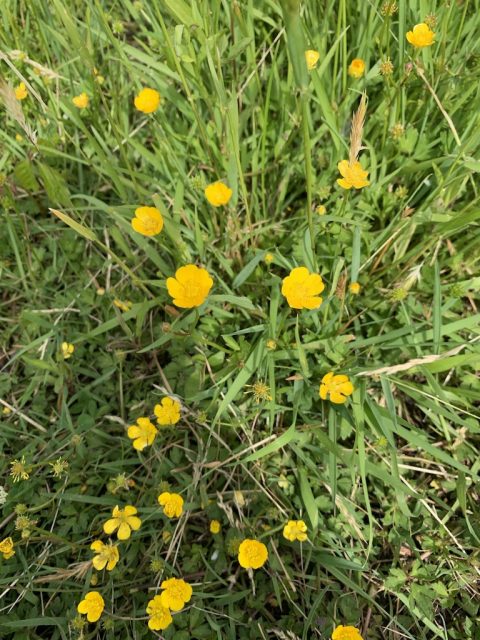 Although they are cute..they are TOXIC to grazing animals! Creeping buttercups are native also to Eurasia and have spread its way across the US. They spread underground by strong roots and establish themselves with tough stems and leaves. They can be controlled either by digging up the penetrating runners beneath the soil or with weed killer. (https://www.rhs.org.uk/advice/profile?PID=784) 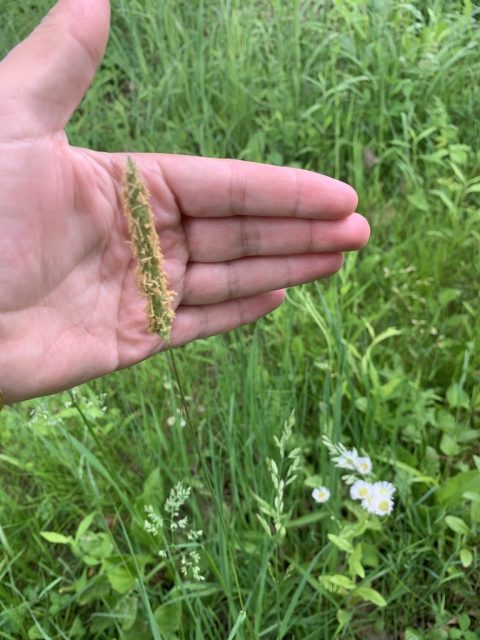 I see no fox

Meadow foxtails are cute little grasses with heads that have teeny grains. This is my monocot because its leaves are very linear. These are not native however but can be a food source for cattle and other grazers. (https://www.illinoiswildflowers.info/grasses/plants/mdw_fxtail.htm) 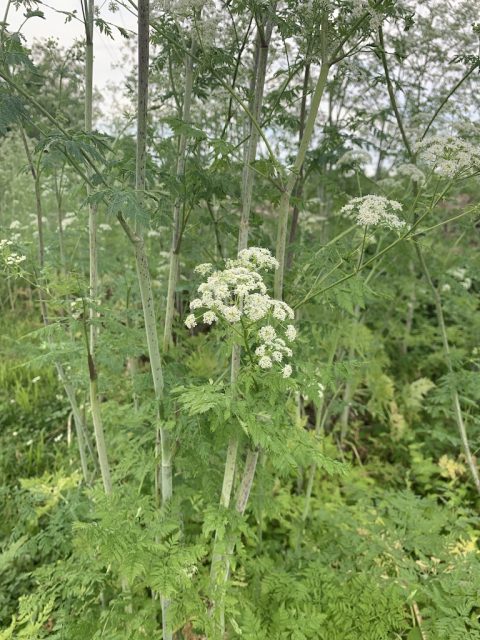 I had originally stopped at this roadside because this plant was scattered EVERYWHERE on my drive. And sure enough.. its poison hemlock. Those asters will trick you! This is my example Dicot because it shows everything a dicot would show – many branched out leaves and multiple petals (sets of 5). 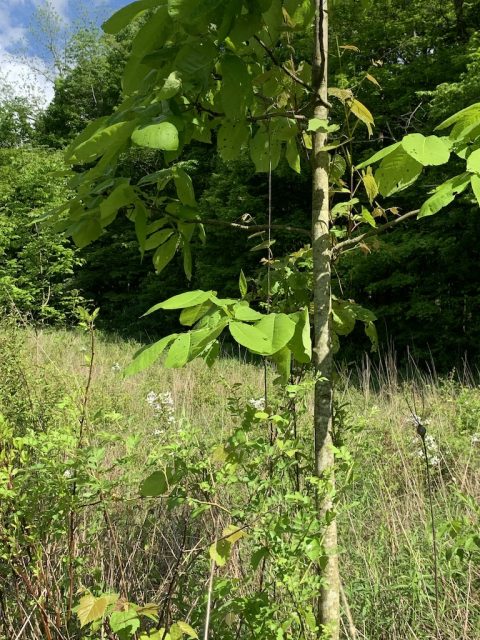 This guy was just getting started so I am hopeful I keyed it right but it only had about 5 leaflets and light-colored bark. This hickory prefers “high lime, clay-rich substrates” according to Forsyth. This would mean it prefers Western, glaciated soils of Ohio! 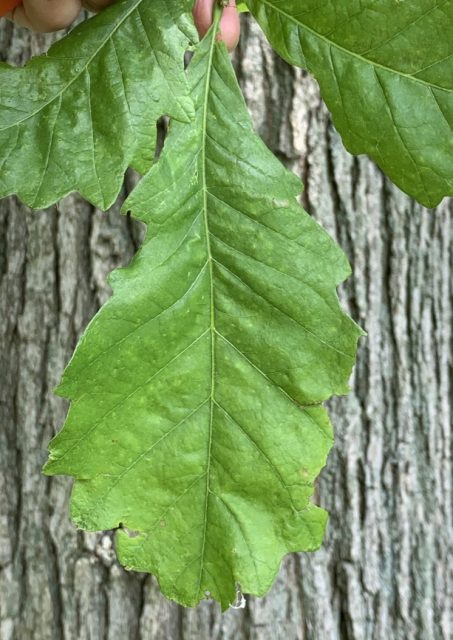 A HUGE tree with kinda lobed leaves and near the prairie area. According to Forsyth, these prefer the more sandstone and acidic soils. That is strange because Licking County is in a mix match area of soils. BUT none the less it is here and has been for AWHILE! 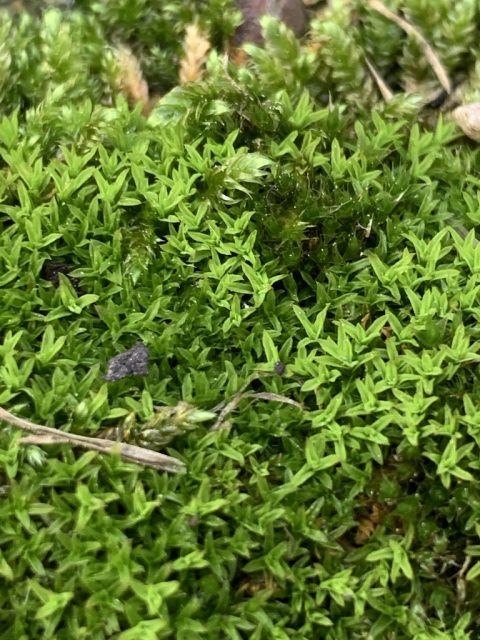 such cute and little leaves

This moss was found in between cracks on my brick patio. Looking up close reveals it is an acrocarp with ovate leaves.I believe this to be Tortula porteri because it has similarly shaped leaves and growth patterns. 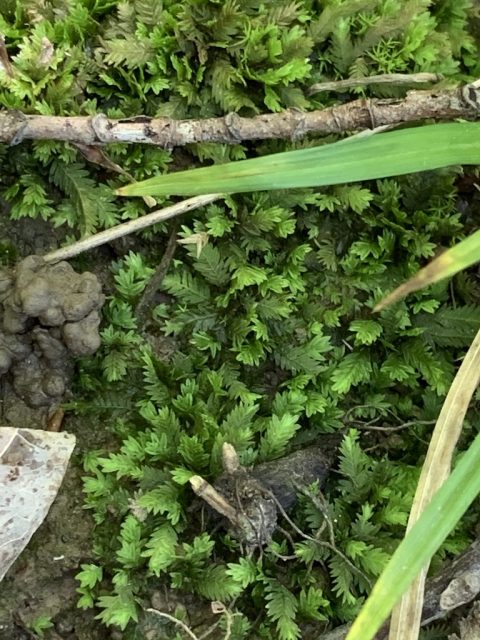 This guy was found on a log on the forest floor in the woods at Dawes. It is a pleurocarp with broad ecostate leaves that are pinnately compound. I think this one would be Thuidium delicatulum because of its pinnate leaves and fern like structure. 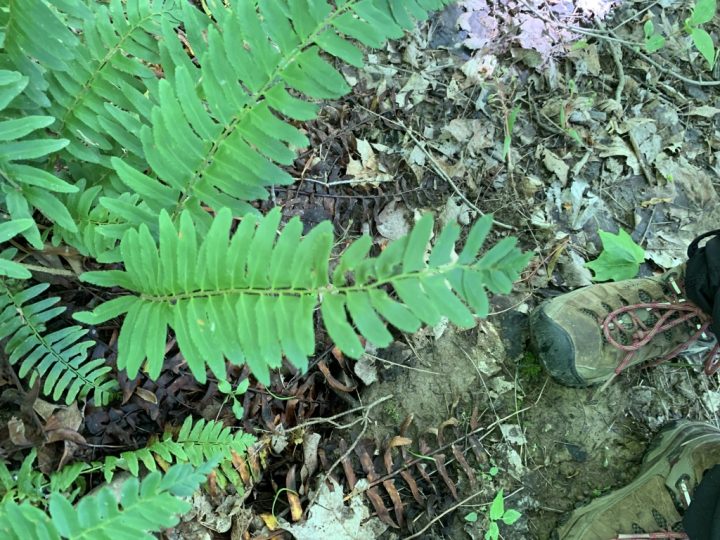 This was a smaller fern in the woodlands of Dawes and it has twice pinnate frond (they are full dissect on both the leaflets and subleaflets). It is dimorphic in that it has fertile and sterile fronds – the fertile fronds have subleaflets towards the end with sori underneath. 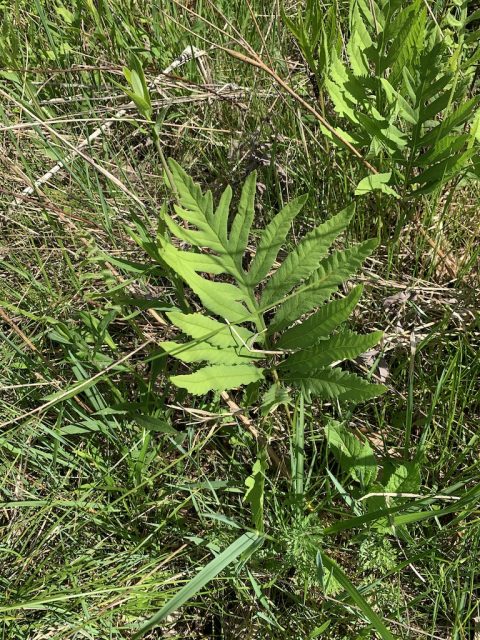 Ferns have feelings too!

This fern has pinnate pinnatifid fronds. Its subleaflets are not fully separated off of the midline. This fern is also dimorphic having the sterile frond shown above. The fertile frond is more pinnate and has sori scattered on them like little beads. 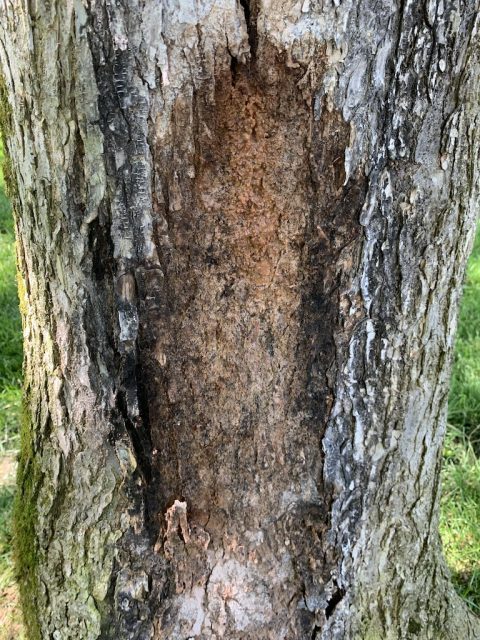 Get this guy a bandaid

On a Green Ash (Fraxinus pennsylvanica)  tree in my backyard, we have had this orange/brown ooze on this tree for a while and we did not know what it was. After some searching online, I found it to be called slime flux. Slime flux is an infection caused by the Enterobacter cloacae bacteria. It can occur when a tree becomes wounded and the slime can cause wood rot. The wound can start to “weep” fermented sap as it tries to drain out the infection. Prevention is the best strategy in combatting slime but there is some debate as to if you can drill holes in the tree to help it drain. But! There is good news in that healthy trees can usually overcome slime flux. https://www.thoughtco.com/prevention-control-of-tree-slime-flux-1342887 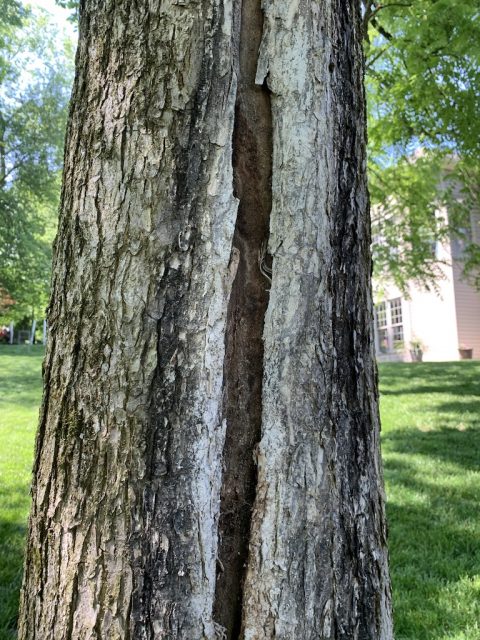 On a separate ash tree in my front yard, we often get significant scratch marks in the fall on the bark of the tree from one of my mortal enemies – deer. Not only do these cute creatures eat everything in my garden but they damage many of our trees by rubbing their antlers on the trees. Deer can rub their antlers of trees to remove some of the velvety furs that come in the fall or to attract females and mark their territory. We have had many scratch marks over the years and it can cause significant damage to the tree’s vascular tissue. From experience, many sprays do not work to deter deer but you can put up fencing to prevent them from scratching. https://bartstreeservice.com/protect-trees-deer-antler-rubbing/ 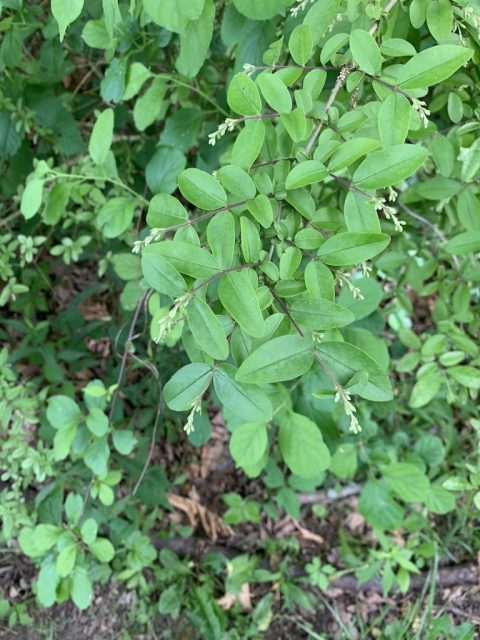 An escaped European shrub with opposite simple long leaves that are not very big. It also has white cone shaped flowers and small blackberry fruits that can be eaten by birds. Found on the East side of Dawes. Some European folklore calls it to be of medicinal use as an anti-inflammatory. https://www.cabi.org/isc/datasheet/30764#touses 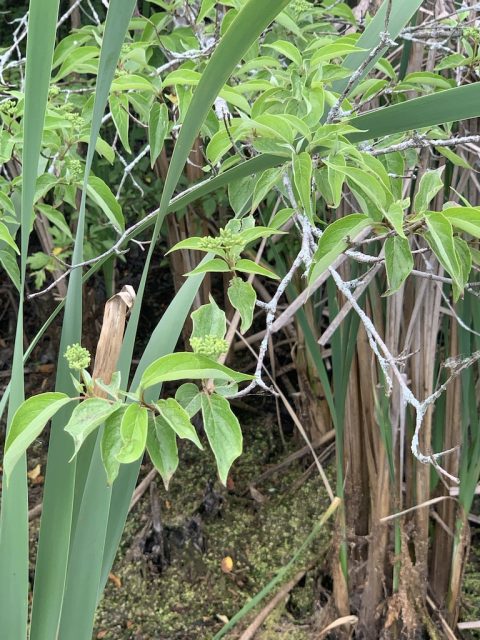 Couldn’t get a good picture without falling in the pond

Shrub with opposite simple leaves and four-petaled white flowers. Twigs are purple-ish in color and soft to touch. Leaves are round but narrow towards the end and are also soft (silky) to the touch. Found near the pond on the East side of Dawes. Almost all parts of this shrub has some medicinal value and Native Americans would use it to treat Malaria! https://facts.net/nature/plants/dogwood-tree-facts